HBR editor in chief Adi Ignatius sat down with the Sanofi CEO to talk about how to drive a strong corporate culture in a dispersed, hybrid era; what the office of the future might look like, and companies' duty to help employees achieve their best selves. Talented employees, he says, “expect to tell you exactly what they think on any given day", and that's great. 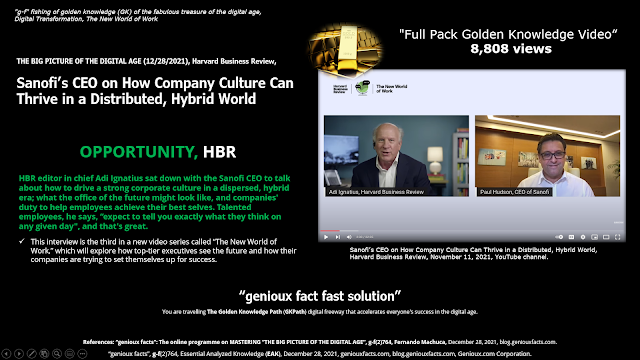 Sanofi’s CEO on How Company Culture Can Thrive in a Distributed, Hybrid World

Paul Hudson is leading the execution of Sanofi’s Play to Win strategy, a five-year plan (2020-2025) designed with the ambition to leverage breakthrough science to change the practice of medicine and to foster a workplace where people can bring their best selves to work. The strategy has sharpened the focus on key R&D areas, including immunology, vaccines, hemophilia, oncology, and rare diseases, with the objective of delivering breakthrough solutions to patients and improve people’s health worldwide. Under Paul’s leadership, and in the middle of a global pandemic, Sanofi has renewed its commitments to society, putting sustainability and social responsibility at the core of its long-term strategy.
Before joining Sanofi, Paul was CEO of Novartis Pharmaceuticals from 2016 to 2019, and a member of the Novartis Executive Committee. His career in healthcare has spanned the globe, with assignments in the US, Japan and Europe. Prior to Novartis, he worked for AstraZeneca, where he held several increasingly senior positions and most recently carried out the roles of president, AstraZeneca US and executive vice president, North America. He began his career in sales and marketing roles at GlaxoSmithKline UK and Sanofi-Synthélabo UK.
Paul holds a degree in economics from Manchester Metropolitan University in the UK, and in July 2018 his alma mater awarded him an honorary Doctor of Business Administration for his achievements in industry.

The New World of Work