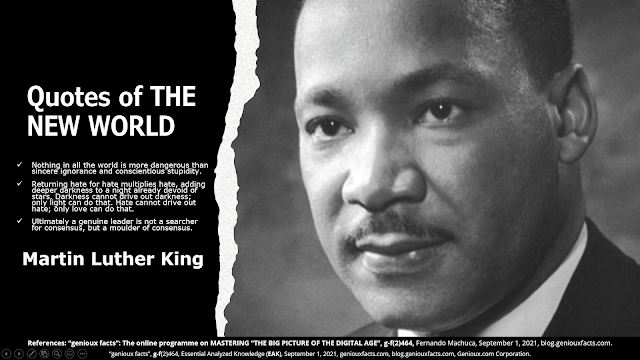 Some other relevant quotes from Martin Luther King Jr.
Extracted from Wikipedia
Martin Luther King Jr. (January 15, 1929 – April 4, 1968) was an American Baptist minister and activist who became the most visible spokesman and leader in the American civil rights movement from 1955 until his assassination in 1968. King advanced civil rights through nonviolence and civil disobedience, inspired by his Christian beliefs and the nonviolent activism of Mahatma Gandhi. He was the son of early civil rights activist and minister Martin Luther King Sr.
King participated in and led marches for blacks' right to vote, desegregation, labor rights, and other basic civil rights. King led the 1955 Montgomery bus boycott and later became the first president of the Southern Christian Leadership Conference (SCLC). As president of the SCLC, he led the unsuccessful Albany Movement in Albany, Georgia, and helped organize some of the nonviolent 1963 protests in Birmingham, Alabama. King helped organize the 1963 March on Washington, where he delivered his famous "I Have a Dream" speech on the steps of the Lincoln Memorial.
On October 14, 1964, King won the Nobel Peace Prize for combating racial inequality through nonviolent resistance. In 1965, he helped organize two of the three Selma to Montgomery marches. In his final years, he expanded his focus to include opposition towards poverty, capitalism, and the Vietnam War.