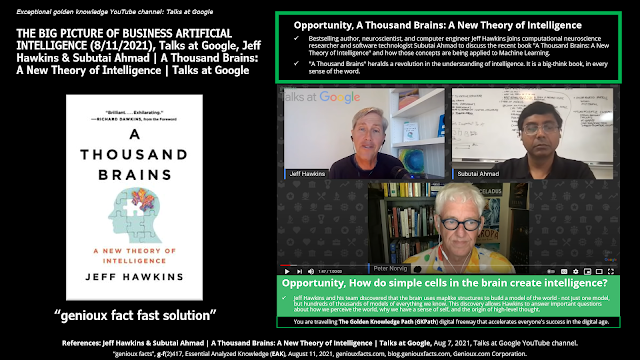 [genioux fact deduced or extracted from Talks at Google]

Jeff Hawkins is a well-known scientist and entrepreneur, considered one of the most successful and highly regarded computer architects in Silicon Valley. He is widely known for founding Palm Computing and Handspring Inc., and for being the architect of many successful handheld computers. Despite his successes as a technology entrepreneur, Hawkins' primary passion and occupation has been neuroscience. From 2002 to 2005, Hawkins directed the Redwood Neuroscience Institute, now located at U.C. Berkeley. He is currently co-founder and chief scientist at Numenta, a research company focused on neocortical theory.

Hawkins also wrote On Intelligence in 2004, with Sandra Blakeslee. He has given over one hundred invited talks at research universities, scientific institutions, and corporate research laboratories. He has been recognized with numerous personal and industry awards and was elected to the National Academy of Engineering in 2003.

Subutai Ahmad is the VP of Research and Engineering at Numenta, bringing with him experience across real time systems, computer vision and learning. He previously served as VP Engineering at YesVideo, Inc. where he helped grow the company from a three-person start-up to a leader in automated digital media authoring. In 1997, Subutai co-founded ePlanet Interactive, a spin-off from Interval Research. ePlanet developed the IntelPlay Me2Cam, the first computer vision product developed for consumers. He has served as a key researcher at Interval Research.

Peter Norvig is an American computer scientist. He is a director of research at Google, LLC, and he was formerly this firm's director of search quality. Norvig is the co-author of the most popular textbook in the field of artificial intelligence: Artificial Intelligence: A Modern Approach used in more than 1,500 universities in 135 countries.