Lesson learned, Inside TikTok’s Highly Secretive Algorithm
Opportunity, TikTok, Only one important piece of information to figure out what you want 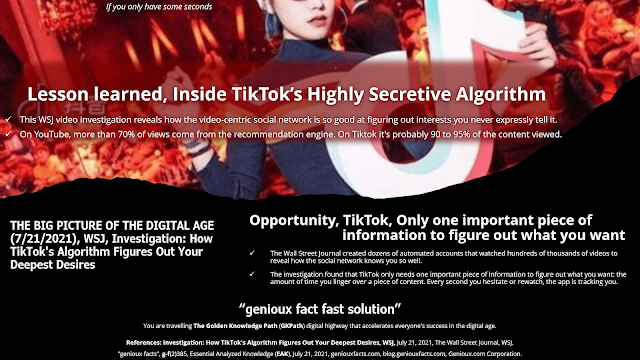 Lesson learned, Inside TikTok’s Highly Secretive Algorithm
Opportunity, TikTok, Only one important piece of information to figure out what you want

Extracted from Wikipedia
The Wall Street Journal is an American business-focused, English-language international daily newspaper based in New York City, with international editions also available in Chinese and Japanese. The Journal, along with its Asian editions, is published six days a week by Dow Jones & Company, a division of News Corp. The newspaper is published in the broadsheet format and online. The Journal has been printed continuously since its inception on July 8, 1889, by Charles Dow, Edward Jones, and Charles Bergstresser.
The Wall Street Journal is one of the largest newspapers in the United States by circulation, with a circulation of about 2.834 million copies (including nearly 1,829,000 digital sales) as of August 2019, compared with USA Today's 1.7 million. The Journal publishes the luxury news and lifestyle magazine WSJ, which was originally launched as a quarterly but expanded to 12 issues in 2014. An online version was launched in 1996, which has been accessible only to subscribers since it began.
It is regarded as a "newspaper of record", particularly in terms of business and financial news. The newspaper has won 37 Pulitzer Prizes (as of 2019). The editorial pages of The Journal are typically conservative in their position. The Journal's editorial board has promoted views that are at odds with the scientific consensus on climate change, acid rain, and ozone depletion, as well as on the health dangers of second-hand smoke, pesticides and asbestos.