If we use our human general intelligence, which is far from artificial intelligence, in the sports industries, we can draw crucially important lessons to grow without limits. 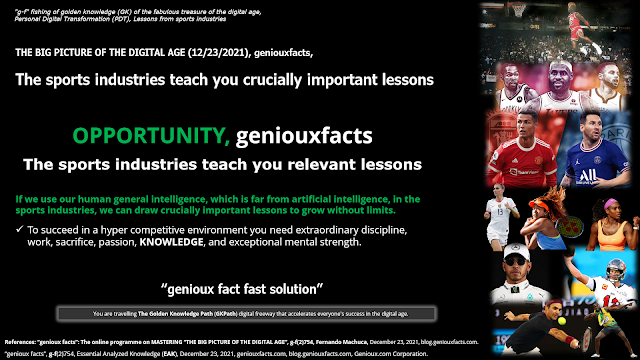 The stories of the most famous athletes

Extracted from Wikipedia
Michael Jeffrey Jordan (born February 17, 1963), also known by his initials MJ, is an American former professional basketball player and businessman. His biography on the official National Basketball Association (NBA) website states: "By acclamation, Michael Jordan is the greatest basketball player of all time." He was integral in helping to popularize the NBA around the world in the 1980s and 1990s, becoming a global cultural icon in the process. Jordan played 15 seasons in the NBA, winning six championships with the Chicago Bulls. He is the principal owner and chairman of the Charlotte Hornets of the NBA and of 23XI Racing in the NASCAR Cup Series.
Legends profile: Michael Jordan, From NBA.com Staff
Few in NBA history can match the accolades, awards and championships Michael Jordan amassed in his days with the Bulls.

The stories of the most famous athletes

Extracted from Wikipedia
Roger Federer (born 8 August 1981) is a Swiss professional tennis player. He is ranked No. 16 in the world by the Association of Tennis Professionals (ATP). He has won 20 Grand Slam men's singles titles, an all-time record shared with Rafael Nadal and Novak Djokovic. Federer has been world No. 1 in the ATP rankings a total of 310 weeks – including a record 237 consecutive weeks – and has finished as the year-end No. 1 five times. Federer has won 103 ATP singles titles, the second most of all-time behind Jimmy Connors, including a record six ATP Finals.
Federer has played in an era where he dominated men's tennis together with Rafael Nadal and Novak Djokovic, who have been collectively referred to as the Big Three and are considered by some to be the three greatest tennis players of all time. A Wimbledon junior champion in 1998, Federer won his first Grand Slam singles title at Wimbledon in 2003 at age 21. In 2004, he won three out of the four major singles titles and the ATP Finals,[d] a feat he repeated in 2006 and 2007. From 2005 to 2010, Federer made 18 out of 19 major singles finals. During this span, he won his fifth consecutive titles at both Wimbledon and the US Open. He completed the career Grand Slam at the 2009 French Open after three previous runner-ups to Nadal, his main rival up until 2010. At age 27, he also surpassed Pete Sampras's then-record of 14 Grand Slam men's singles titles at Wimbledon in 2009.
Although Federer remained in the top 3 through most of the 2010s, the success of Djokovic and Nadal in particular ended his dominance over grass and hard courts. From mid-2010 through the end of 2016, he only won one major title. During this period, Federer and Stan Wawrinka led the Switzerland Davis Cup team to their first title in 2014, adding to the gold medal they won together in doubles at the 2008 Beijing Olympics. Federer also has a silver medal in singles from the 2012 London Olympics, where he finished runner-up to Andy Murray. After taking half a year off in late 2016 to recover from knee surgery, Federer had a renaissance at the majors. He won three more Grand Slam singles titles over the next two years, including the 2017 Australian Open over Nadal and a men's singles record eighth Wimbledon title later in 2017. He also became the oldest ATP world No. 1 in 2018 at age 36.