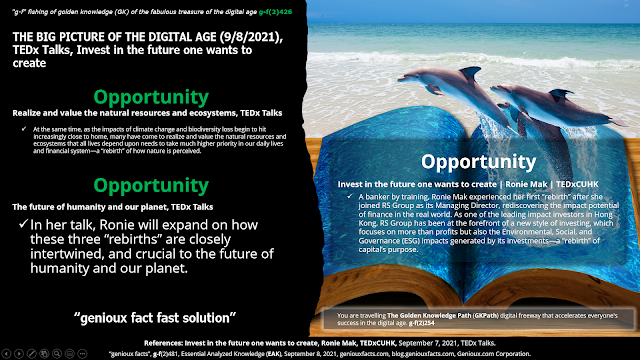 Opportunity,  TEDx Talks  YouTube channel is an exceptional mine of golden knowledge

Invest in the future one wants to create | Ronie Mak | TEDxCUHK

Extracted from Wikipedia
TED Conferences LLC (Technology, Entertainment, Design) is an American media organization that posts talks online for free distribution under the slogan "ideas worth spreading". TED was conceived by Richard Saul Wurman, who co-founded it with Harry Marks in February 1984 as a conference; it has been held annually since 1990. TED's early emphasis was on technology and design, consistent with its Silicon Valley origins. It has since broadened its perspective to include talks on many scientific, cultural, political, humanitarian and academic topics. It has been curated by Chris Anderson, a British-American businessman, through the non-profit TED Foundation since July 2019 (originally by the non-profit Sapling Foundation).
The main TED conference is held annually in Vancouver, British Columbia, Canada, at the Vancouver Convention Centre. Prior to 2014, the conference was held in Long Beach, California, United States. TED events are also held throughout North America and in Europe, Asia, and Africa, offering live streaming of the talks. They address a wide range of topics within the research and practice of science and culture, often through storytelling. The speakers are given a maximum of 18 minutes to present their ideas in the most innovative and engaging ways they can. Past speakers include Bill Clinton, Sean M. Carroll, Elon Musk, Ray Dalio, Cédric Villani, Stephen Hawking, Jane Goodall, Al Gore, Temple Grandin, Shahrukh Khan, Gordon Brown, David Cameron, Billy Graham, Richard Dawkins, Sam Harris, Bill Gates, Dolph Lundgren, Bob Weir, Shashi Tharoor, Bono, Larry Page and Sergey Brin, Leana Wen, Pope Francis, Jeff Bezos, and many Nobel Prize winners.
Since June 2006, TED Talks have been offered for free viewing online, under an Attribution-NonCommercial-NoDerivatives Creative Commons license, through TED.com. As of December 2020 over 3,500 TED Talks are freely available on the website. In June 2011, TED Talks' combined viewing figure stood at more than 500 million, by November 2012, TED Talks had been watched over one billion times worldwide. While TED Talks are available for free online for personal learning, sharing TED content in commercial contexts (for example, in corporate learning and talent development) requires a license.

Extracted from LinkedIn
Managing Director at RS Group, a HK based family office focused on impact investments and sustainability related activities (www.rsgroup.asia).
M&A banker with over 16 years banking experience including 6 years business management in the CEO office. Acted as Secretary of the Hong Kong Association of Banks in 2012.