"g-f" fishing of golden knowledge (GK) of the fabulous treasure of the digital age, The BRAIN (9/5/2021)  g-f(2)426
Opportunity, You Are Not Who You Think You Are, NYT
Alert, How we think about thinking need to be radically revised, NYT
Opportunity, How holistic is the research drift, NYT
Alert, The amazing reality of our reality, NYT 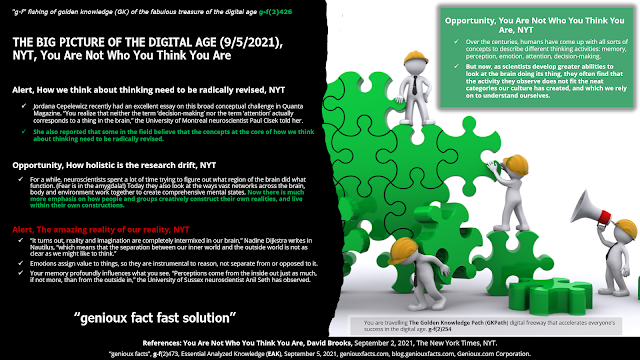 Alert, The amazing reality of our reality, NYT

David Brooks (@nytdavidbrooks) became an Op-Ed columnist for The New York Times in September 2003. He is currently a commentator on “PBS NewsHour,” NPR’s “All Things Considered” and NBC’s “Meet the Press.”
He is the author of “Bobos in Paradise: The New Upper Class and How They Got There” and “On Paradise Drive: How We Live Now (And Always Have) in the Future Tense.” In March 2011 he came out with his third book, “The Social Animal: The Hidden Sources of Love, Character, and Achievement,” which was a No. 1 New York Times best seller. His most recent book is “The Second Mountain.”
Mr. Brooks also teaches at Yale University, and is a member of the American Academy of Arts and Sciences.