g-f(2)686 THE BIG PICTURE OF THE DIGITAL AGE (11/27/2021), UNESCO, UNESCO member states adopt the first ever global agreement on the Ethics of Artificial Intelligence

Enjoy this g-f(2)686 golden knowledge juice about the first ever global agreement on the Ethics of Artificial Intelligence. 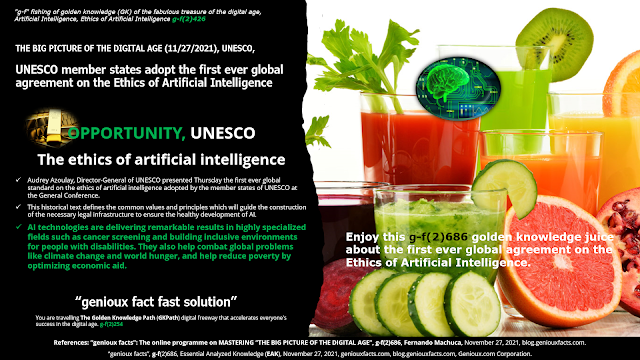 Press conference: UNESCO presents a global agreement on the ethics of artificial intelligence

Extracted from WIKIPEDIA
The United Nations Educational, Scientific and Cultural Organization (UNESCO) (French: Organisation des Nations unies pour l'éducation, la science et la culture) is a specialised agency of the United Nations (UN) aimed at promoting world peace and security through international cooperation in education, the arts, the sciences, and culture. It has 193 member states and 11 associate members, as well as partners in the non-governmental, intergovernmental, and private sector. Headquartered at the World Heritage Centre in Paris, France, UNESCO has 53 regional field offices and 199 national commissions that facilitate its global mandate.
UNESCO was founded in 1945 as the successor to the League of Nations' International Committee on Intellectual Cooperation. Its constitution establishes the agency's goals, governing structure, and operating framework. UNESCO's founding mission, which was shaped by the Second World War, is to advance peace, sustainable development and human rights by facilitating collaboration and dialogue among nations. It pursues this objective through five major program areas: education, natural sciences, social/human sciences, culture and communication/information. UNESCO sponsors projects that improve literacy, provide technical training and education, advance science, protect independent media and press freedom, preserve regional and cultural history, and promote cultural diversity.
As a focal point for world culture and science, UNESCO's activities have broadened over the years; it assists in the translation and dissemination of world literature, helps establish and secure World Heritage Sites of cultural and natural importance, works to bridge the worldwide digital divide, and creates inclusive knowledge societies through information and communication. UNESCO has launched several initiatives and global movements, such as Education For All, to further advance its core objectives.
UNESCO is governed by the General Conference, composed of member states and associate members, which meets biannually to set the agency's programmes and the budget. It also elects members of the Executive Board, which manages UNESCO's work, and appoints every four years Director-General, who serves as UNESCO's chief administrator. UNESCO is a member of the United Nations Sustainable Development Group, a coalition of UN agencies and organisations aimed at fulfilling the Sustainable Development Goals.