Top Performers Have a Superpower: Happiness 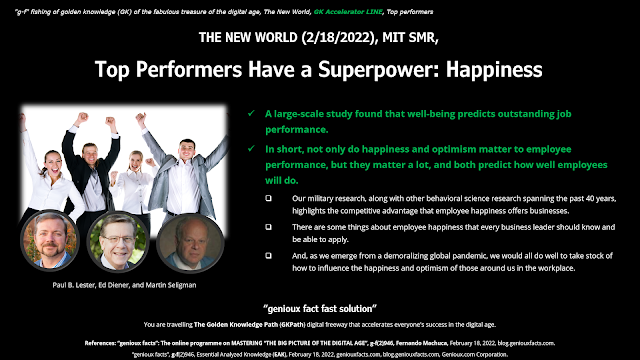 Dr. Paul B. Lester is an Associate Professor in the Naval Postgraduate School’s Graduate School of Defense Management (GSDM). Prior to joining GSDM in the Fall of 2019, he served as the founding Director of the Research Facilitation Laboratory (RFL), a component office of the Army Analytics Group and the Office of the Deputy Under Secretary of the Army, as a Department of the Army Civilian (GS-15). Paul retired from the Army in 2018 after 23 years as an officer in both the Infantry and Medical Service Corps.
Paul completed his doctorate at the University of Nebraska-Lincoln's College of Business where he focused on leadership development. He also graduated from West Point with a BS in American History and from Murray State University with an MS in Management.

Ed Diener, Ph.D., was Alumni Distinguished Professor of Psychology (Emeritus) at the University of Illinois, where he had been a faculty member since 1974. He was also a professor of psychology at the University of Utah and the University of Virginia.
Dr. Diener, who joined Gallup as a Senior Scientist in 1999, advised Gallup on research in psychological well-being. His research focused on the theories and measurement of well-being; temperament and personality influences on well-being; income and well-being; and cultural influences on well-being; and how employee well-being enhances organizational performance.
Dr. Diener received several prestigious scholarly awards. He received the Distinguished Scientific Contribution Award from the American Psychological Association and the William James Fellow Award for outstanding contributions to scientific psychology from the Association of Psychological Science. He also was awarded the Distinguished Quality-of-Life Researcher Award from the International Society of Quality of Life Studies. He was elected a fellow of the American Academy of Arts & Sciences, and received honorary doctorates from Freie Universitat Berlin and Eureka College.
Dr. Diener published more than 330 academic articles and chapters; about 250 of these focus on the psychology of well-being. His work has appeared in journals such as Psychological Science, American Psychologist, Psychological Bulletin and Psychological Inquiry, among many others. Dr. Diener was the editor of the Journal of Personality and Social Psychology from 1998 to 2003 and editor of Journal of Happiness Studies; he was also the founding editor of Perspectives on Psychological Science. Dr. Diener co-edited three books on subjective well-being: Well-Being: The Foundations of Hedonic Psychology, Advances in Quality of Life Theory and Research, and Culture and Subjective Well-Being. He also coedited the Handbook of Multimethod Measurement in Psychology. Dr. Diener wrote a popular book on Happiness with his son, Robert Biswas-Diener and is the coauthor of Well-Being for Public Policy.
Dr. Diener was president of three scientific societies: the International Society for Quality of Life Studies, the International Positive Psychology Association, and the Society for Personality and Social Psychology. He was a fellow of five professional societies, including the Association for Psychological Science, American Psychological Association, and International Society for Quality of Life Studies, Society for Personality and Social Psychology, and Experimental Psychology.
Dr. Diener earned his bachelor’s degree in psychology from California State University, Fresno and his doctorate in personality psychology from the University of Washington. He has more than 262 thousand citations to his credit. Dr. Diener also received several teaching awards.

Martin Seligman is the Zellerbach Family Professor of Psychology at the University of Pennsylvania, director of the university’s Positive Psychology Center, and a former president of the American Psychological Association. He was named by Academic Influence as the world’s most influential psychologist during the last decade.

The story of the New World in a single sentence

Made up of multiple overlapping disruptions, in continuous transformation, the wonderful New World (that is, it offers an amazing treasure tailored to each person, group, community, company, organization, town, city, state, country, region and the world in general), is heterogeneous built from the wise exploitation of the fabulous treasure (i.e., Three powerful engines: PEOPLE + Emerging Technologies + Multidisciplinary Golden Knowledge (GK)) of the digital age. 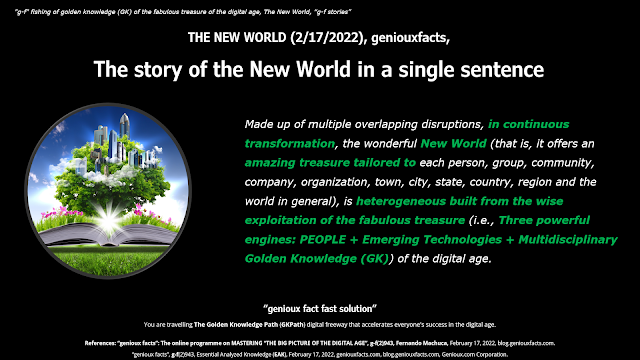 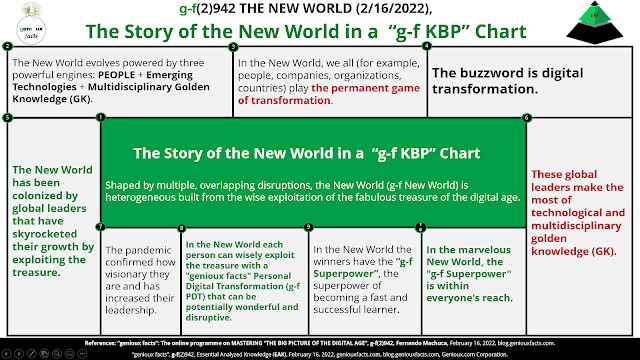 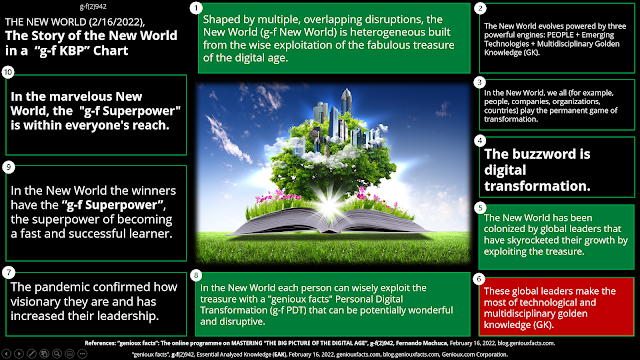 Some examples of "g-f stories"