g-f(2)915 THE NEW WORLD (2/9/2022), Forbes, Why Do Startups Fail And Can We Create An AI Formula To Prevent Failure? An Interview With Harvard Business School Professor Tom Eisenmann

Being a young entrepreneur, my goal in this research is to help fellow entrepreneurs avoid known pitfalls. That is why, I was intrigued by Professor Tom Eisenmann's  book titled, “Why Startups Fail: A New Roadmap for Entrepreneurial Success.” 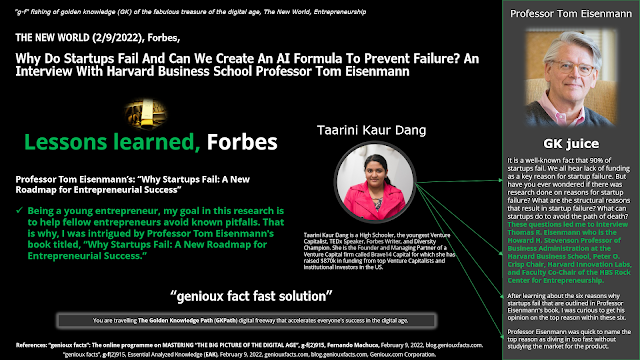 Why Do Startups Fail And Can We Create An AI Formula To Prevent Failure? An Interview With Harvard Business School Professor Tom Eisenmann, Taarini Kaur Dang, February 9, 2022, Forbes.

Taarini Kaur Dang is a High Schooler, the youngest Venture Capitalist, TEDx Speaker, Forbes Writer, and Diversity Champion. She is the Founder and Managing Partner of a Venture Capital firm called Brave14 Capital for which she has raised $870k in funding from top Venture Capitalists and Institutional Investors in the US.
Taarini is the co-Founder of a diversity empowerment Instagram account called @ClassyWomenn which has ramped to 1.1 million followers in 4 years across 10 Asian countries. She has helped over 500 individuals on a one-on-one basis so far.
At the age of 13, she wrote a book (The Young Aspiring Entrepreneur) which has a foreword from Intel Capital President Wendell Brooks and quotes from Stanford Professor Chuck Eesley, Intel’s Chief Diversity Officer Barbara Whye, Oracle ex-President Ray Lane and author Linda Swindling. She has been an invited speaker at top conferences, like Google Launchpad Female Founders Summit, Collision conference, TiECon, Women’s March, ATEA, AI ShowBiz Summit, etc.
She has been the only speaker under the age of 18 at these conferences. She has been featured in media by BBC, Nasdaq, Mercury News, etc.
In 2019, she was ranked among the Top 100 Women in Finance in India. She is also the youngest person to win the Young American-Indian Award which she received from the Indian Ambassador to the US Navtej Sarna for her work in entrepreneurship.