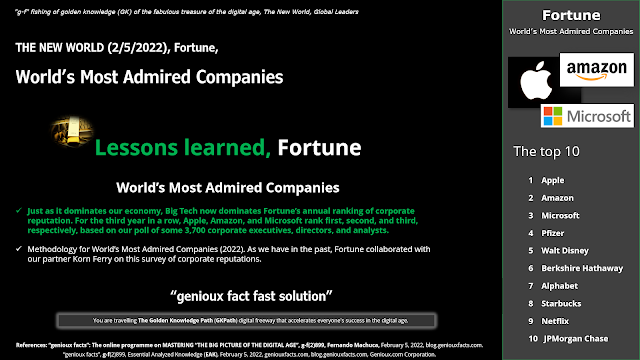 World’s Most Admired Companies, February 1, 2022, Fortune.
The information about the authors was extracted from Wikipedia.

Fortune is an American multinational business magazine headquartered in New York City. It is published by Fortune Media Group Holdings, owned by Thai businessman Chatchaval Jiaravanon. The publication was founded by Henry Luce in 1929. The magazine competes with Forbes and Bloomberg Businessweek in the national business magazine category and distinguishes itself with long, in-depth feature articles.
The magazine regularly publishes ranked lists, including the Fortune 500, a ranking of companies by revenue that it has published annually since 1955. The magazine is also known for its annual Fortune Investor's Guide.

Methodology for World’s Most Admired Companies (2022)