"g-f" fishing of golden knowledge (GK) of the fabulous treasure of the digital age, The New World, Artificial Intelligence, Transforming a Technology Organization for the Future (1/26/2022)  g-f(2)426 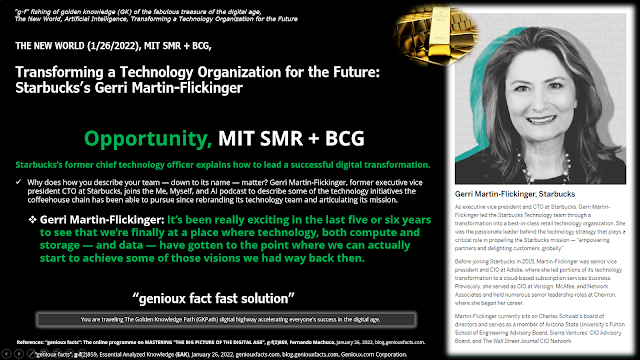 Sam Ransbotham (@ransbotham) is a professor in the information systems department at the Carroll School of Management at Boston College, as well as guest editor for MIT Sloan Management Review’s Artificial Intelligence and Business Strategy Big Ideas initiative. Shervin Khodabandeh is a senior partner and managing director at BCG and the coleader of BCG GAMMA (BCG’s AI practice) in North America. He can be contacted at shervin@bcg.com.
Me, Myself, and AI is a collaborative podcast from MIT Sloan Management Review and Boston Consulting Group and is hosted by Sam Ransbotham and Shervin Khodabandeh. Our engineer is David Lishansky, and the coordinating producers are Allison Ryder and Sophie Rüdinger.

As executive vice president and CTO at Starbucks, Gerri Martin-Flickinger led the Starbucks Technology team through a transformation into a best-in-class retail technology organization. She was the passionate leader behind the technology strategy that plays a critical role in propelling the Starbucks mission — “empowering partners and delighting customers, globally.”
Before joining Starbucks in 2015, Martin-Flickinger was senior vice president and CIO at Adobe, where she led portions of its technology transformation to a cloud-based subscription services business. Previously, she served as CIO at Verisign, McAfee, and Network Associates and held numerous senior leadership roles at Chevron, where she began her career.
Martin-Flickinger currently sits on Charles Schwab’s board of directors and serves as a member of Arizona State University’s Fulton School of Engineering Advisory Board, Sierra Ventures’ CIO Advisory Board, and The Wall Street Journal CIO Network.