The article teaches the beauty and depth of the digital age 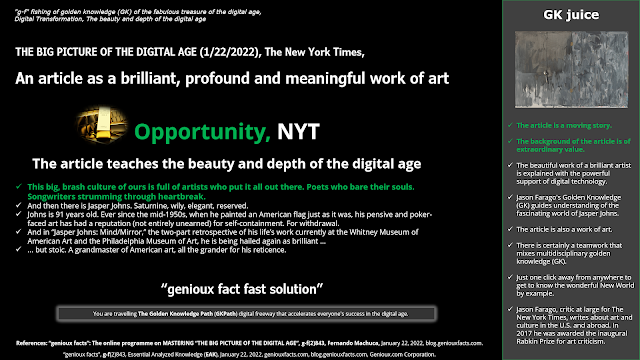 How a Gray Painting Can Break Your Heart, Jason Farago, January 16, 2022, The New York Times, NYT.

Jason Farago (@jsf), critic at large for The New York Times, writes about art and culture in the U.S. and abroad. In 2017 he was awarded the inaugural Rabkin Prize for art criticism.
Mr. Farago began writing about art for The Times in 2015, and since then he has reviewed exhibitions, conducted interviews and reported features across the United States and in a dozen foreign countries. In 2020 he helped develop Close Read, a digital initiative that elaborates the meaning of a single work of art, detail by detail.
He previously wrote for the Guardian, serving as its first U.S. art critic and as an online opinion columnist. He has also been a regular contributor to the New Yorker, the BBC, NPR, the New York Review of Books and Artforum.
He co-founded and served as editor in chief of the art magazine Even, whose ten-issue run is collected in the anthology “Out of Practice” (Motto Books, 2018).
Mr. Farago was born in New York. He holds a bachelor’s degree from Yale University and a master’s degree from the Courtauld Institute of Art in London, both in art history. His last name rhymes with “Chicago.”

Extracted from Wikipedia
Jasper Johns (born May 15, 1930) is an American painter, sculptor, and printmaker whose work is associated with abstract expressionism, Neo-Dada, and pop art. He is well known for his depictions of the American flag and other US-related topics. Johns's works regularly sell for millions of dollars at sale and auction, including a reported $110 million sale in 2010. At multiple times works by Johns have held the title of most paid for a work by a living artist.
Johns has received many honors throughout his career, including receipt of the National Medal of Arts in 1990, and the Presidential Medal of Freedom in 2011. He was elected to the American Philosophical Society in 2007. In 2018, The New York Times called him the United States' "foremost living artist."

Walkthrough of “Jasper Johns: Mind/Mirror” at the Philadelphia Museum of Art