"g-f" fishing of golden knowledge (GK) of the fabulous treasure of the digital age, The New World, Microsoft to Power Its Netflix-of-Gaming Aspirations (1/19/2022)  g-f(2)426

Microsoft to Power Its Netflix-of-Gaming Aspirations 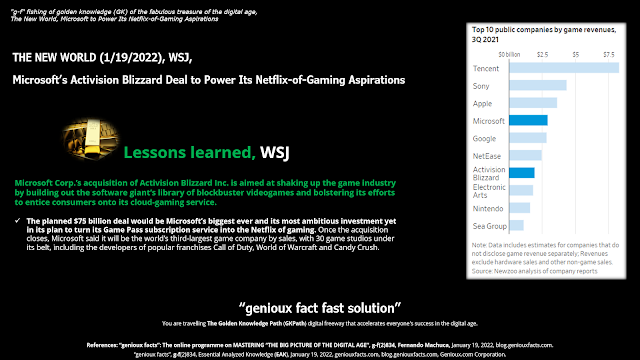 Jim Cramer reacts to Microsoft's Activision Blizzard deal: It's genius for both of them

Aaron Tilley (@aatilley) reports on enterprise technology and cloud computing out of San Francisco. He previously reported on Apple and the semiconductor industry for The Information and Forbes. He grew up in the Pacific Northwest and graduated from the University of Washington.

Sarah E. Needleman (@saraheneedleman) is a reporter for The Wall Street Journal who writes about the tech sector.
In her earlier years at the Journal, she covered small business and careers. She also wrote Accidental Entrepreneur, a monthly column on starting a business for the first time. She joined the paper in 2001.
Sarah graduated from Rutgers University in 1997 with a bachelor's degree in journalism.
She is a word-game addict and toy collector who lives with her husband and daughter in northern N.J.

One of the world’s top tech companies

6. Activision Deal Is Start of M&A Frenzy in Tech: Ives

7. What the Microsoft-Activision Blizzard deal means for gamers

10. Microsoft-Activision Blizzard deal: 'The industrial logic is there,' analyst says