"g-f" fishing of golden knowledge (GK) of the fabulous treasure of the digital age, The Personal Digital Transformation, Success with significance (1/11/2022)

Success without significance — which I define as purpose, service, and meaningful relationships — is not really success at all. And waiting until you’re in the latter half of your life to achieve true success is a waste. 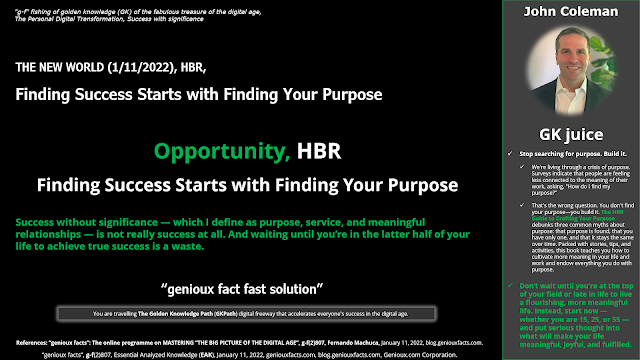 John Coleman is the author of the HBR Guide to Crafting Your Purpose and a coauthor of the book, Passion & Purpose: Stories from the Best and Brightest Young Business Leaders. Follow him on Twitter at @johnwcoleman or contact him through his website.
Extracted from his website
About
John Coleman is an investor, writer, and public speaker. A frequent contributor to Harvard Business Review, John and his work have been featured in Forbes, the Washington Post, the New York Times, the Financial Times, and the LA Times among other publications. He previously published Passion & Purpose (HBP, 2011) and How to Argue Like Jesus (Crossway, 2009). A frequent public speaker, John has addressed hundreds of audiences on college campuses, at conferences, and for corporations and non-profits.
John is a Managing Partner at Sovereign’s Capital, which invests in public equities, private equity, and venture capital. He has prior experience at McKinsey & Company, Invesco, and Bridgewater Associates among others. He’s active in the community, with current or prior experience on the boards of Berry College, the DeKalb County School System, the Georgia Student Finance Commission, the Georgia Charter Schools Association, and the Georgia Independent College Association. He’s been recognized as a Term Member at the Council on Foreign Relations, a Presidential Leadership Scholar, and as one of both Georgia Trend’s and the Atlanta Business Chronicle’s “40 Under 40.”
John is a summa cum laude graduate of Berry College, where he was student commencement speaker. He’s an MBA graduate with High Distinction from the Harvard Business School, where he was Class Day Speaker and a Dean’s Award Winner. And he’s an MPA graduate of the Harvard Kennedy School, where he was a George Fellow and a Zuckerman Fellow.