"g-f" fishing of golden knowledge (GK) of the fabulous treasure of the digital age, Personal Digital Transformation, What Distinguishes the Super Rich From the Rest of Us (1/19/2022)  g-f(2)426

What Distinguishes the Super Rich From the Rest of Us 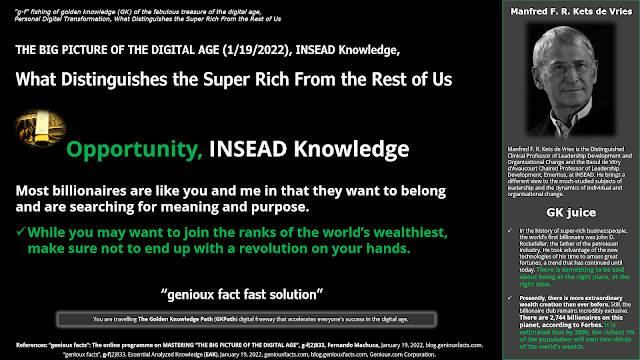 Manfred F. R. Kets de Vries is the Distinguished Clinical Professor of Leadership Development and Organisational Change and the Raoul de Vitry d'Avaucourt Chaired Professor of Leadership Development, Emeritus, at INSEAD. He brings a different view to the much-studied subjects of leadership and the dynamics of individual and organisational change. Bringing to bear his knowledge and experience of economics (EconDrs, University of Amsterdam), management (ITP, MBA, and DBA, Harvard Business School), and psychoanalysis (Canadian Psychoanalytic Society and the International Psychoanalytic Association), he scrutinises the interface between international management, psychoanalysis, psychotherapy, and dynamic psychiatry. His specific areas of interest are leadership, career dynamics, executive stress, entrepreneurship, family business, succession planning, cross-cultural management, team building, coaching, and the dynamics of corporate transformation and change. Manfred F. R. Kets de Vries directs The Challenge of Leadership Executive Education programme.
A clinical professor of leadership and organisational change, he held the Raoul de Vitry d'Avaucourt Chair of Leadership Development at INSEAD from September 1992 to March 2013. He is the founding programme director of the INSEAD Executive Master In Change. He has received the INSEAD Distinguished Teacher Award five times. He has held professorships at McGill University, the Ecole des Hautes Etudes Commerciales, Montreal, and the Harvard Business School, and has lectured at management institutions around the world.
Financial Times, Le Capital, Wirtschaftswoche, and The Economist rated Manfred Kets de Vries as one of the world's top fifty leading management thinkers, as well as one of the most influential contributors to human resource management. In 2008, he received the Lifetime Achievement Award from the International Leadership Association (the Leadership Legacy Project), being viewed as one of the world’s six founding professionals in the development of leadership as a field and discipline.
He is the author, co-author or editor of thirty-five books and has published over 350 scientific papers as articles or chapters in books. His books and articles were translated into thirty-one languages. He is a member of seventeen editorial boards. He has been elected a Fellow of the Academy of Management.

KDVI was founded by Manfred Kets de Vries, Elisabet Engellau and Oriane Kets de Vries to meet the needs of contemporary executives and organisations as they face the challenges of leadership. The KDVI Associates & Affiliates have global experience in a variety of business contexts. Many have worked as COOs or CEOs in a wide range of national and global organisations before retraining as coaches. Others are faculty in leading business schools, where they conduct research directly related to organisational development challenges. All are trained to a high level in clinical organisational psychology and/or leadership consulting. KDVI has a permanent research and administrative team that provides high-touch and on-going support before, during and after our interventions. The aim is to provide a seamless client experience by remaining in-tune to our client’s changing needs and requirements, and to build long-term relationships in order to help make systemic change a reality.

In sum, the super-rich may be different from you and me, but not very much