g-f PDT: How to develop a “Growth Mindset”

The treasure of the New World, the treasure of the digital age, teaches how to develop a “Growth Mindset”. Fabulous research has been developed. Carol Dweck has lit the path to greatness for all with her wonderful research, academic, and applied work on the "growth mindset." 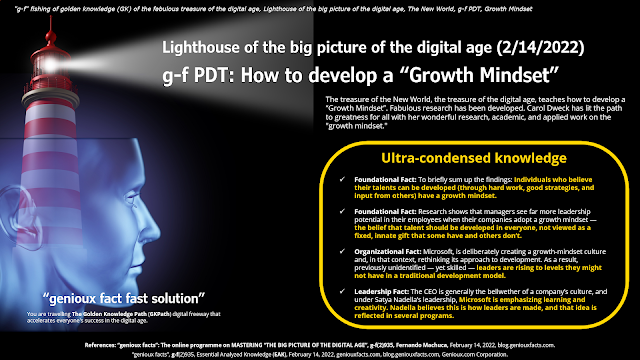 What Having a "Growth Mindset" Actually Means

The power of believing that you can improve | Carol Dweck

Extracted from Wikipedia
Carol Susan Dweck is an American psychologist. She is the Lewis and Virginia Eaton Professor of Psychology at Stanford University. Dweck is known for her work on mindset. She was on the faculty at Columbia University, Harvard University, and the University of Illinois before joining the Stanford University faculty in 2004. She is a Fellow of the Association for Psychological Science.

Dweck has primary research interests in motivation, personality, and development. She teaches courses in motivation, personality, and social development.
Her key contribution to social psychology relates to implicit theories of intelligence, described in her 2006 book Mindset: The New Psychology of Success. According to Dweck, individuals can be placed on a continuum according to their implicit views of where ability comes from. Some believe their success is based on innate ability; these are said to have a "fixed" theory of intelligence (fixed mindset). Others, who believe their success is based on hard work, learning, training and doggedness are said to have a "growth" or an "incremental" theory of intelligence (growth mindset).
In a fixed mindset students believe their basic abilities, their intelligence, their talents, are just fixed traits. They have a certain amount and that's that, and then their goal becomes to look smart all the time and never look dumb. In a growth mindset students understand that their talents and abilities can be developed through effort, good teaching and persistence. They don't necessarily think everyone's the same or anyone can be Einstein, but they believe everyone can get smarter if they work at it. 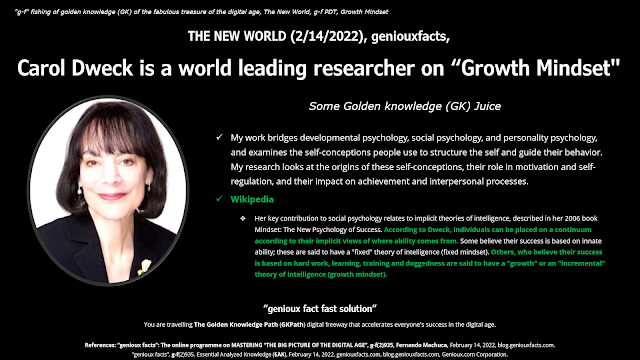 How Microsoft Uses a Growth Mindset to Develop Leaders