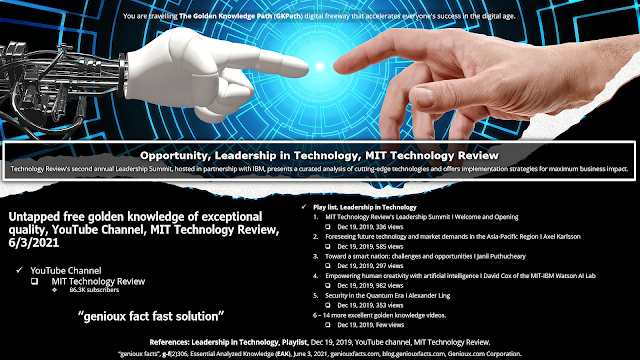 Opportunities for those traveling at high speed on GKPath
Opportunity, Leadership in Technology, MIT Technology Review

Extracted from Wikipedia
MIT Technology Review is a magazine wholly owned by the Massachusetts Institute of Technology, and editorially independent of the university. It was founded in 1899 as The Technology Review, and was re-launched without "The" in its name on April 23, 1998 under then publisher R. Bruce Journey. In September 2005, it was changed, under its then editor-in-chief and publisher, Jason Pontin, to a form resembling the historical magazine.
Before the 1998 re-launch, the editor stated that "nothing will be left of the old magazine except the name." It was therefore necessary to distinguish between the modern and the historical Technology Review. The historical magazine had been published by the MIT Alumni Association, was more closely aligned with the interests of MIT alumni, and had a more intellectual tone and much smaller public circulation. The magazine, billed from 1998 to 2005 as "MIT's Magazine of Innovation," and from 2005 onwards as simply "published by MIT", focused on new technology and how it is commercialized; was sold to the public and targeted at senior executives, researchers, financiers, and policymakers, as well as MIT alumni.
In 2011, Technology Review received an Utne Reader Independent Press Award for Best Science/Technology Coverage.