g-f(2)244 The Big Picture of the Digital Age (4/25/2021), UNCTAD, A few developing countries overperform on frontier technologies, but most lag behind.

A few developing nations are exhibiting stronger capabilities to use, adopt and adapt frontier technologies than their per capita GDPs would suggest, but most are lagging behind, according to an index of 158 countries in UNCTAD’s Technology and Innovation Report 2021 released on 25 February. 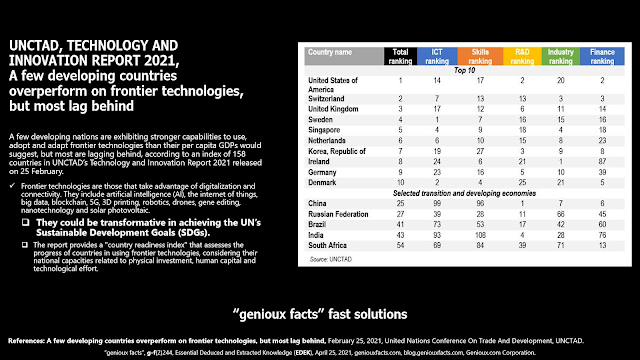 Extracted from Wikipedia
The United Nations Conference on Trade and Development (UNCTAD) was established in 1964 as a permanent intergovernmental body.
UNCTAD is the part of the United Nations Secretariat dealing with trade, investment, and development issues. The organization's goals are to: "maximize the trade, investment and development opportunities of developing countries and assist them in their efforts to integrate into the world economy on an equitable basis". UNCTAD was established by the United Nations General Assembly in 1964 and it reports to the UN General Assembly and United Nations Economic and Social Council.
The primary objective of UNCTAD is to formulate policies relating to all aspects of development including trade, aid, transport, finance and technology. The conference ordinarily meets once in four years; the permanent secretariat is in Geneva.
One of the principal achievements of UNCTAD (1964) has been to conceive and implement the Generalised System of Preferences (GSP). It was argued in UNCTAD that to promote exports of manufactured goods from developing countries, it would be necessary to offer special tariff concessions to such exports.
The creation of UNCTAD in 1964 was based on concerns of developing countries over the international market, multi-national corporations, and great disparity between developed nations and developing nations. The United Nations Conference on Trade and Development was established to provide a forum where the developing countries could discuss the problems relating to their economic development. The organisation grew from the view that existing institutions like GATT (now replaced by the World Trade Organization, WTO), the International Monetary Fund (IMF), and World Bank were not properly organized to handle the particular problems of developing countries. Later, in the 1970s and 1980s, UNCTAD was closely associated with the idea of a New International Economic Order (NIEO).

g-f(2)617 Lighthouse of the big picture of the digital age (10/31/2021), THE CHALLENGE: Finding the Right Balance Between Running and Changing