g-f(2)157 The Big Picture of the Digital Transformation, 3/6/2021, AP, Only 7% of larger companies have digitally savvy executive teams, and these teams deliver higher revenue growth and net margins. 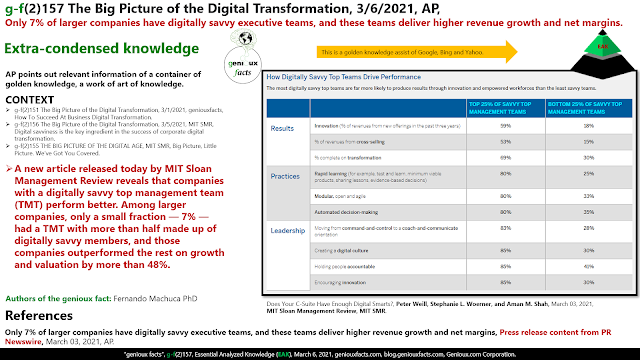 PR Newswire
From Wikipedia, the free encyclopedia
PR Newswire was a distributor of press releases headquartered in New York City. The service was created in 1954 to allow companies to electronically send press releases to news organizations, at first using teleprinters. The founder, Herbert Muschel, operated the service from his house in Manhattan for approximately 15 years. The business was eventually sold to Western Union and then United Newspapers of London. In December 2015, Cision Inc. announced it would acquire the company. On January 1, 2021, Cision formally merged PR Newswire into the company, ending its status as an legal entity after 66 years. Cision plans to continue utilizing the brand name for the foreseeable future in the United States, as well as in Europe and the Asia-Pacific regions. The services provided by PR Newswire have continued as Cision’s Distribution division.