g-f(2)101 THE BIG PICTURE OF THE DIGITAL AGE, WSJ, Worried About Ageism? Where You Live Matters.

A recent study of data collected from all 50 states found that implicit bias—a subconscious negative attitude—against older people was most prevalent in the country’s southeastern and northeastern states. 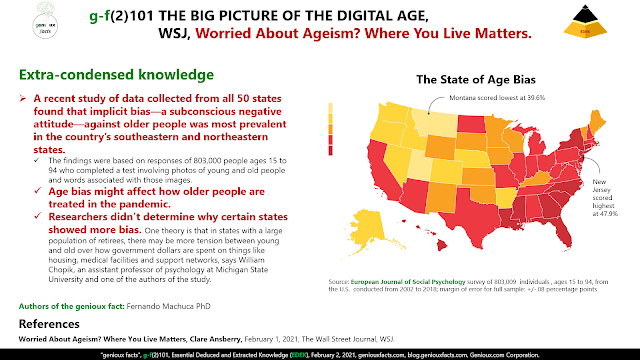 Worried About Ageism? Where You Live Matters, Clare Ansberry, February 1, 2021, The Wall Street Journal, WSJ.
ABOUT THE AUTHORS
Clare Ansberry
Bureau Chief, The Wall Street Journal
Clare Ansberry is bureau chief of the Pittsburgh bureau of The Wall Street Journal. In 1984 Ms. Ansberry joined the Journal’s Cleveland bureau as a reporter. She transferred to the Pittsburgh bureau as a reporter in 1985 and has covered banking, photography and the steel industry. She became Pittsburgh’s deputy bureau chief in September 1992 and was named bureau chief in January 1996.
By Director of genioux facts
Email ThisBlogThis!Share to TwitterShare to FacebookShare to Pinterest
Labels: Biases, The Big Picture of Digital Age, Viral Knowledge
Newer Post Older Post Home