g-f(2)62 THE BIG PICTURE OF THE DIGITAL AGE: MarketWatch, Videogames are a bigger industry than movies and North American sports combined, thanks to the pandemic 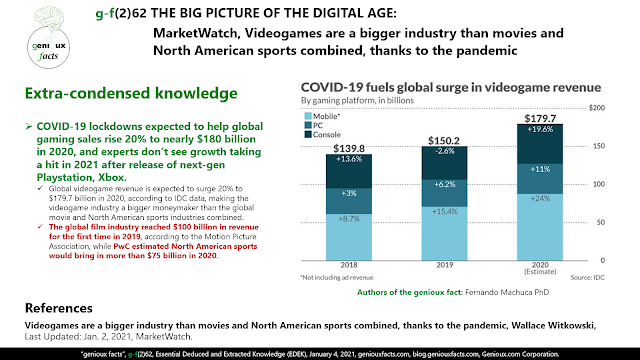 Videogames are a bigger industry than movies and North American sports combined, thanks to the pandemic, Wallace Witkowski, Last Updated: Jan. 2, 2021, MarketWatch.
ABOUT THE AUTHORS
Wallace Witkowski came to MarketWatch from the Associated Press in New York, where he was a business reporter specializing in pharmaceutical companies. He previously reported for trade publications in covering the drug and medical-device industries back to 1998. Based in San Francisco, his focus is on U.S. equities. Follow Wally on Twitter at: @wmwitkowski.
By Director of genioux facts
Email ThisBlogThis!Share to TwitterShare to FacebookShare to Pinterest
Labels: Digital Transformation, The Big Picture of Digital Age, The Big Picture of Sports, Viral Knowledge
Newer Post Older Post Home