g-f(2)33 Robots in a Post-Pandemic World: Why wouldn’t robots start flying off the shelves? 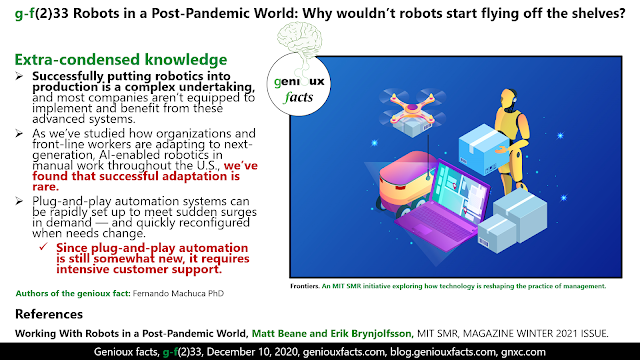 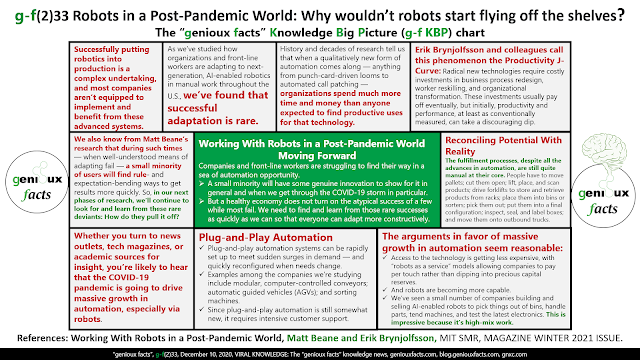 Category 2: The Big Picture of the Digital Era

Working With Robots in a Post-Pandemic World, Matt Beane and Erik Brynjolfsson, September 16, 2020, MIT Sloan Management Review, MAGAZINE WINTER 2021 ISSUE.
ABOUT THE AUTHORS
Matt Beane (@mattbeane) is an assistant professor in technology management at the University of California, Santa Barbara, and a digital fellow at the Digital Economy Lab at Stanford University. Erik Brynjolfsson (@erikbryn) is the director of the Digital Economy Lab at Stanford and coauthor of The Second Machine Age (W.W. Norton, 2014).
Extracted from Wikipedia
Erik Brynjolfsson (born 1962) is an American academic. He is a senior fellow and professor at Stanford University where he directs the Digital Economy Lab at the Stanford Institute for Human-Centered AI, with appointments at SIEPR, the Stanford Department of Economics and the Stanford Graduate School of Business. He is also a Research Associate at the National Bureau of Economic Research and a best-selling author of several books. He is known for his contributions to the world of IT productivity research and work on the economics of information and the digital economy more generally.
Extracted from mattbeane.com
BIOS
50 words:
Professor Matt Beane does field research on work involving robots to help us understand the implications of intelligent machines for the broader world of work. Beane is an Assistant Professor in the Technology Management Program at the University of California, Santa Barbara and a Digital Fellow with Stanford’s Digital Economy Lab.
By Director of genioux facts
Email ThisBlogThis!Share to TwitterShare to FacebookShare to Pinterest
Labels: AI, Automation, Bombshell Knowledge, Disruption, Management, The Big Picture of Digital Age
Newer Post Older Post Home