g-f(2)39 University of Oxford: Misinformation about basic issues in science and technology abounds

The Oxford Martin Programme on MISINFORMATION, SCIENCE AND MEDIA 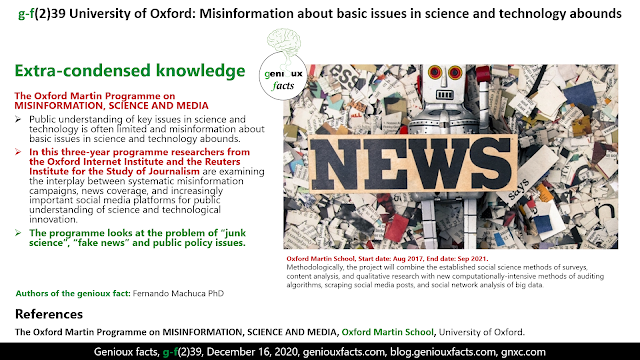 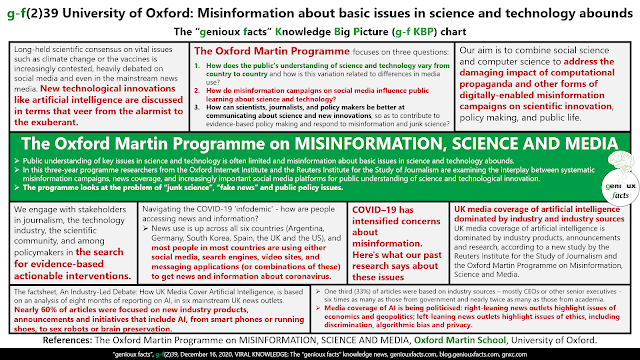 1. A new, better world for everyone

2. The Big Picture of the Digital Era

3. The Big Picture of Sports

4. Coronavirus and other viruses

The Oxford Martin Programme on MISINFORMATION, SCIENCE AND MEDIA, Oxford Martin School, University of Oxford.
ABOUT THE AUTHORS
Extracted from Wikipedia
The University of Oxford (legally The Chancellor, Masters and Scholars of the University of Oxford) is a collegiate research university in Oxford, Oxfordshire, England. There is evidence of teaching as early as 1096, making it the oldest university in the English-speaking world, the world's second-oldest university in continuous operation and one of the most prestigious academic institutions in the world.
The university is made up of 39 semi-autonomous constituent colleges, six permanent private halls, and a range of academic departments which are organised into four divisions. All the colleges are self-governing institutions within the university, each controlling its own membership and with its own internal structure and activities. All students are members of a college. It does not have a main campus, and its buildings and facilities are scattered throughout the city centre.
Oxford operates the world's oldest university museum, as well as the largest university press in the world and the largest academic library system nationwide. In the fiscal year ending 31 July 2019, the university had a total income of £2.45 billion, of which £624.8 million was from research grants and contracts.
Oxford has educated a wide range of notable alumni, including 28 prime ministers of the United Kingdom and many heads of state and government around the world. As of October 2020, 72 Nobel Prize laureates, 3 Fields Medalists, and 6 Turing Award winners have studied, worked, or held visiting fellowships at the University of Oxford, while its alumni have won 160 Olympic medals.
The Oxford Martin School is a research and policy unit based in the Social Sciences Division of the University of Oxford. It was founded in June 2005 as the James Martin 21st Century School and is located in the original building of the Indian Institute. It is named after its benefactor, James Martin, author of the books The Wired Society and The Meaning of the 21st Century. Its Director is Charles Godfray, who took up the post in February 2018. Founding director of the School was Ian Goldin who held the post from September 2006 to September 2016.
'Finding solutions to the world's most urgent problems' is the stated mission of the Oxford Martin School.
By Director of genioux facts
Email ThisBlogThis!Share to TwitterShare to FacebookShare to Pinterest
Labels: A new better world for everyone, AI, Biases, Coronavirus and other viruses, Misinformation, The Big Picture of Digital Age, The Big Picture of Sports
Newer Post Older Post Home