A new generation of neuroscience writers (e.g., Jon Lieff, David Eagleman, Sanjay Sarma, Luke Yoquinto, Jay Shetty) makes the profound realm of the brain more understandable to the rest of us. As research unlocks ever more knowledge about the brain, new applications will emerge. As the cliché goes, the more we learn, the more we learn how much we don’t know. 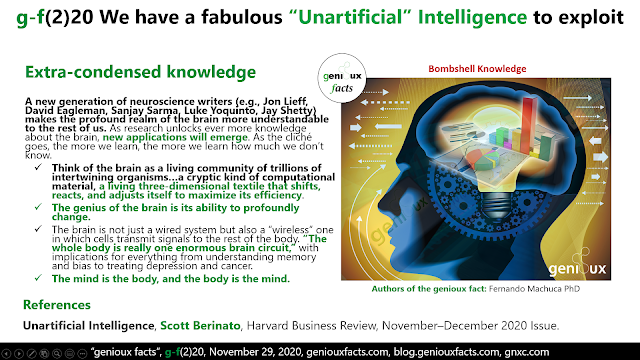 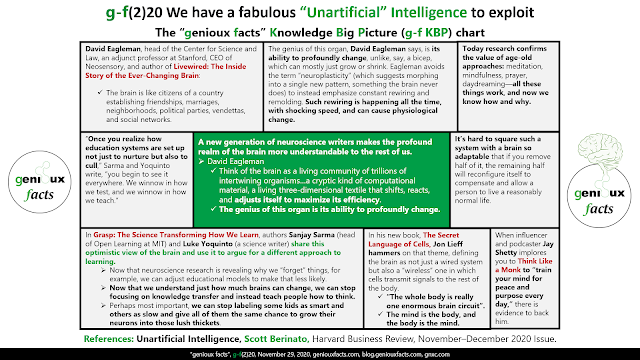 Category 2: The Big Picture of The Digital Age

Unartificial Intelligence, Scott Berinato, Harvard Business Review, November–December 2020 Issue.
ABOUT THE AUTHORS
Scott Berinato is a senior editor at Harvard Business Review and the author of Good Charts Workbook: Tips Tools, and Exercises for Making Better Data Visualizations and Good Charts: The HBR Guide to Making Smarter, More Persuasive Data Visualizations.
Extracted from Amazon
Scott Berinato, senior editor at Harvard Business Review, is an award-winning writer, editor, content architect, and self-described "dataviz geek" who relishes the challenge of finding visual solutions to communication problems. At HBR he has championed the use of visual communication and storytelling and has launched successful visual formats, including popular narrated infographics, on HBR.org. Before joining HBR, Scott was an executive editor at CXO Media, where he pioneered the use of visual features in several of the company's publications. In addition to his work on visualization, he also enjoys writing and thinking about technology, business, science, and the future of publishing. He has a master's degree in journalism from the Medill School at Northwestern University.
By Director of genioux facts
Email ThisBlogThis!Share to TwitterShare to FacebookShare to Pinterest
Labels: A new better world for everyone, Bombshell Knowledge, Brain Science, Cognitive Psychology, HBR, The Big Picture of Digital Age, Unartificial Intelligence
Newer Post Older Post Home