Apple’s functional organization is rare, if not unique, among very large companies. It flies in the face of prevailing management theory that companies should be reorganized into divisions and business units as they become large. But something vital gets lost in a shift to business units: the alignment of decision rights with expertise. 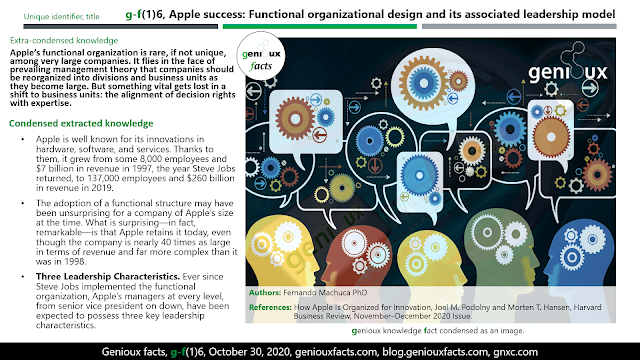 How Apple Is Organized for Innovation, Joel M. Podolny and Morten T. Hansen, Harvard Business Review, November–December 2020 Issue.
Joel M. Podolny (Wikipedia, Google Scholar, LinkedIn) is the dean and vice president of Apple University in Cupertino, California. The former dean of the Yale School of Management, Podolny was a professor at Harvard Business School and the Stanford Graduate School of Business.
Morten T. Hansen (Wikipedia, Google Scholar, LinkedIn, Twitter) is a professor at the University of California, Berkeley, and a faculty member at Apple University, Apple. He is the author of Great at Work and Collaboration and co-author of Great by Choice. He was named one of the top management thinkers in the world by the Thinkers50 in 2019. Find him on Twitter: @MortentHansen.
By Director of genioux facts
Email ThisBlogThis!Share to TwitterShare to FacebookShare to Pinterest
Labels: A new better world for everyone, Bombshell Knowledge, Innovation, Knowledge Management, Leadership, Management, Organizational structure, The Big Picture of Digital Age
Newer Post Older Post Home