g-f(1)3: Our knowledge economy is a resilient growth engine that overcomes any shock

Knowledge makes for a more productive and resilient economy, and leads to the kind of agility and problem-solving ability that is especially needed in the face of sudden unanticipated shocks 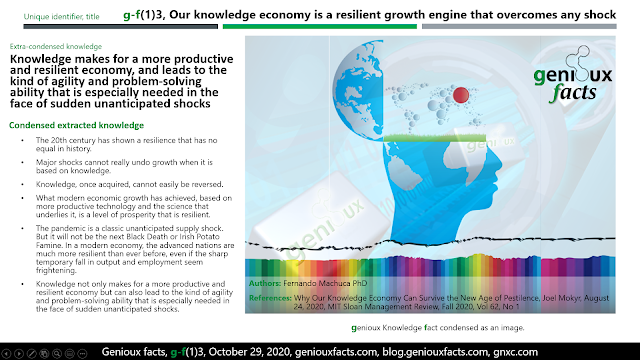 Why Our Knowledge Economy Can Survive the New Age of Pestilence, Joel Mokyr, August 24, 2020, MIT Sloan Management Review, Fall 2020, Vol 62, No 1.
ABOUT THE AUTHOR
Joel Mokyr is the Robert H. Strotz Professor of Arts and Sciences and professor of economics and history at Northwestern University, and the Sackler Professor (by special appointment) at the Eitan Berglas School of Economics at Tel Aviv University.
Extracted from Wikipedia

A Culture of Growth

Mokyr presents his explanations for the Industrial Revolution in the 2016 book A Culture of Growth: The Origins of the Modern Economy. The book has received positive reviews. Deirdre McCloskey described it as a "brilliant book... It’s long, but consistently interesting, even witty. It sustains interest right down to page 337... The book is not beach reading. But you will finish it impressively learned about how we got to where we are in the modern world." In her review, McCloskey furthermore lauded Mokyr as a "Nobel-worthy economic scientist".
By Director of genioux facts
Email ThisBlogThis!Share to TwitterShare to FacebookShare to Pinterest
Labels: A new better world for everyone, Bombshell Knowledge, Economy, Knowledge, Knowledge Economy, New Normal, The Big Picture of Digital Age
Newer Post Older Post Home