The World Economic Forum’s first Jobs Reset Summit convened more than 1,000 leaders from government, business, and civil society to shape a new agenda for growth, jobs, skills, and equity. It was designed around four pillars: 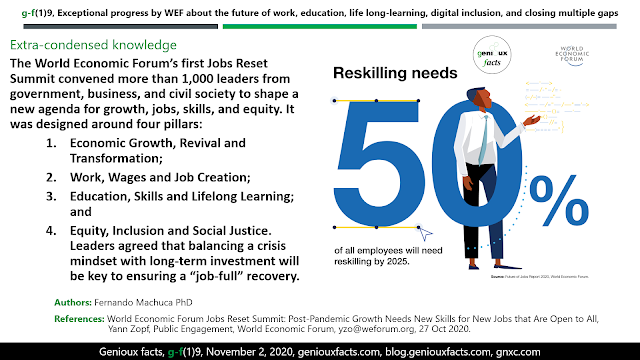 The World Economic Forum (WEF), based in Cologny, Geneva Canton, Switzerland, is an international NGO, founded in 1971. The WEF's mission is stated as "committed to improving the state of the world by engaging business, political, academic, and other leaders of society to shape global, regional, and industry agendas".

The WEF hosts an annual meeting at the end of January in Davos, a mountain resort in Graubünden, in the eastern Alps region of Switzerland. The meeting brings together some 3,000 business leaders, international political leaders, economists, celebrities and journalists for up to five days to discuss global issues, across 500 sessions.

The organization also convenes some six to eight regional meetings each year in locations across Africa, East Asia, Latin America, and India and holds two further annual meetings in China and the United Arab Emirates. Beside meetings, the organization provides a platform for leaders from all stakeholder groups from around the world – business, government and civil society – to collaborate on multiple projects and initiatives. It also produces a series of reports and engages its members in sector-specific initiatives.

WEF, What future of jobs do we want to build?