g-f(1)13 Exceptional moment: We are reinventing the world in the midst of two disruptions

We find ourselves at a defining moment: the decisions and choices we make today will determine the course of entire generations’ lives and livelihoods. We have the tools at our disposal. The bounty of technological innovation which defines our current era can be leveraged to unleash human potential. We have the means to reskill and upskill individuals in unprecedented numbers, to deploy precision safety nets which protect displaced workers from destitution, and to create bespoke maps which orient displaced workers towards the jobs of tomorrow where they will be able to thrive. 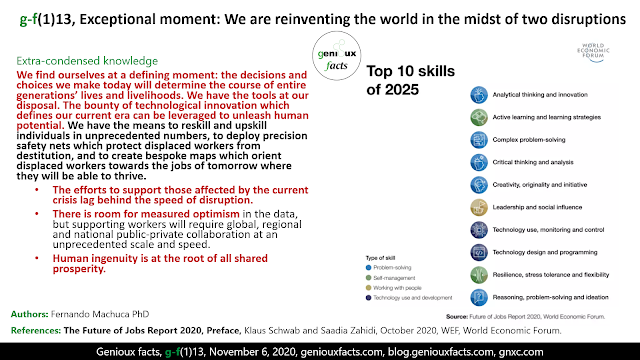 The Future of Jobs Report 2020, Preface, Klaus Schwab and Saadia Zahidi, October 2020.
ABOUT THE AUTHORS
Klaus Schwab
Professor Klaus Schwab was born in Ravensburg, Germany in 1938. He is Founder and Executive Chairman of the World Economic Forum, the International Organization for Public-Private Cooperation.
He founded the Forum in 1971, the same year in which he published Moderne Unternehmensführung im Maschinenbau (Modern Enterprise Management in Mechanical Engineering). In that book, he argued that the management of a modern enterprise must serve not only shareholders but all stakeholders (die Interessenten), to achieve long-term growth and prosperity.
Schwab has encouraged the establishment of communities providing global expertise and knowledge for problem-solving. Among them is the Network of Global Future Councils, the world’s foremost interdisciplinary knowledge network dedicated to promoting innovative thinking on the future.
The Forum employs over 700 people, with its headquarters in Geneva, Switzerland, and additional offices in New York, San Francisco, Beijing and Tokyo.
An engineer and economist by training, Professor Klaus Schwab holds doctorates in Economics (summa cum laude) from the University of Fribourg, in Engineering from the Swiss Federal Institute of Technology, and a Masters of Public Administration from the Kennedy School of Government at Harvard University.
His latest books are The Fourth Industrial Revolution (2016), a worldwide bestseller translated into 30 languages, and Shaping the Fourth Industrial Revolution (2018).
During the course of his wide-ranging career, Schwab has received numerous honours. He holds 17 honorary doctorates, and national medals of honour, including the Grand Cordon of the Order of the Rising Sun of Japan, the Grand Cross with Star of the National Order of Germany and the Knight of the Légion d’Honneur of France. He was also knighted by Queen Elizabeth II – Knight Commander of the Order of Saint Michael and Saint George (KCMG).
Saadia Zahidi (Twitter, LinkedIn)
Managing Director, World Economic Forum
BA in Economics, Smith College; MPhil in International Economics, Graduate Institute Geneva; MPA, Harvard University. With the World Economic Forum: Economist (2003-2005); Head of Gender Parity Programme (2005-2011); Head of Civil Society (2008-2011); Head of Employment and Gender Initiatives (2013-2016); Head of Education, Gender and Work (2016-2018); currently Head of Centre for the New Economy and Society and Member of the Managing Board. Co-Author of Forum reports on Human Capital, Gender Gaps and Future of Jobs. Author, Fifty Million Rising (2018). Recipient of honours and awards, including: BBC 100 Women (2013 and 2014); Financial Times/McKinsey inaugural Bracken Bower Prize (2014); longlisted for FT/Mckinsey Business Book of the Year (2018). Interests: future of work, education and skills, income inequality and using big data for public good.
By Director of genioux facts
Email ThisBlogThis!Share to TwitterShare to FacebookShare to Pinterest
Labels: A new better world for everyone, Breaking Knowledge, Disruption, Knowledge Economy, Knowledge Management, Leadership, Reinventing the business, The Big Picture of Digital Age, The future of work
Newer Post Older Post Home